Wagner Brakes is a re-manufacturer of brake shoes used within a drum style brake for cars and trucks. An epoxy powder coating is utilized by Wagner as a rust inhibitor. The smaller brake shoes produced have bonded pads, whereas the larger ones have riveted pads.

A new facility was built in mid-1993 for better brake shoe processing. At the facility, old brake shoes are disassembled, cleaned, powder coated, cured, fitted with new brake pads and repackaged for distribution to customers. The facility operates 90 hours per week.

The operation was initially designed with seven separate remanufacturing cells. Each line contains one four-foot long shortwave oven. The heating elements are T3 lamps with a reflective housing. Gas convection ovens were initially considered for the application, but too much floor space was required. The shortwave ovens have the advantage of a small footprint and reasonable energy consumption. The disadvantage is their maintenance requirements. Several months after the facility’s opening, the heaters began to fail. Two of the shortwave ovens undergo repairs every week that require an average of seven hours per week of labor plus the cost for parts. The cost of parts and labor combined equals $26,000 per year. More important than the parts and labor cost is the downtime and its associated overtime costs.

The engineering team at Wagner Brakes decided it was time for a new approach. Because of the past problems, the team decided that long-term testing was required before implementing new heating technology. After two years of testing, that new approach was approved. The decision was made to install seven replacement medium-wave electric infrared ovens from Blasdel Enterprises.

Their medium-wave infrared oven achieved all of the goals for a new curing oven including:

Advantages of using infrared for this application:

The new medium-wave infrared ovens are either 6′ or 10′ long depending on part size and weight. The shortwave infrared ovens were 4′ long. All the new ovens are 3′ wide. The shortwave ovens were operating at full power to cure the powder, whereas the new medium-wave Blasdel ovens were designed to operate at less than 50% power. The new ovens provide for future increases in line speed without adversely affecting floor space despite their length increase over the old ovens. A convection oven would have required a minimum of 50′ for the same project.

The shortwave infrared ovens require an average of seven hours per week of preventive maintenance. After two years of operation, there haven’t been any heaters that prematurely failed in the Blasdel medium-wave oven as a result of any heater problems. Several heaters were damaged by conveyor problems, but this is not related to heater design. With a typical life expectancy of 25,000 hours for Solar Products’ panel heaters, the customer will continue to operate for a long time while experiencing minimal maintenance issues. 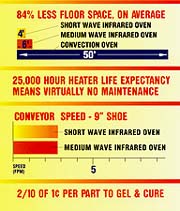 Input power rating is often viewed as the actual power usage for an electric infrared oven. In this case, the 10′ oven for producing 9″ brake shoes requires 108 kW of electric infrared energy. But, in actual operation, its energy usage is 41 kW. The energy calculation is 41 kW/hr x 5.5 cents per kW/hr= $2.25 per hour of operation. Based on the current production rate, that equates to 2/10 of 1 cent per part. In other words, it costs one cent to cure five brake shoes. The energy consumption for paint and powder applications typically accounts for less that 1% of the product selling price. Our guess is that this amount is well below that 1% margin. The best part is that Solar Products’ panel heaters maintain a consistently high radiant efficiency (80%) over time. 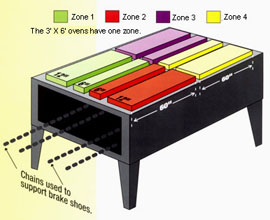 Note: Each 18″ oven half can operate independently. This allows the heater output power to be adjusted to part weight. Because the brake shoes range in weight from 1.5 – 15 pounds, they each require different power outputs to match their curing times. The 10′ oven is used for heavier parts.