Introducing the revolutionary V-series heater. The V-series is perfect for applications that require high power, tight process control and fast heat-up/ cool-down. V-Shaped stamped elements have low mass for fast heating/cooling and minimal thermal lag for extremely tight process control. The elements are bonded to a high temperature insulation board having low thermal conductivity, low thermal mass and low heat capacity to minimize stored heat so they can be switched on and off in seconds. This makes them ideal for processing heat sensitive products such as coated webs and textiles. V-series heaters offer power densities and response times that rival those of short wavelength heaters except they come in a very durable construction and have a medium wavelength output, which is readily absorbed by most products. Therefore, they are ideally suited for drying water or solvents as well as heating plastics, glass, etc. 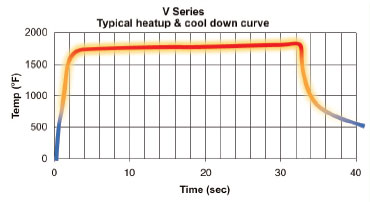 V Series vs. The Competition

V Series vs. The Competition

Fast-responding, medium-wavelength, infrared panel heaters using stamped serpentine elements have been used in industry for decades. In traditional construction, the flat elements are held against a refractory board by manually inserted pins. Solar Products Inc. has developed a unique V-shaped element which provides numerous performance improvements over conventional stamped element heaters including the following:

According to Paul Ross, VP of Product Development “…Solar Products didn’t invent the stamped element heater, but we certainly perfected it…”

Recently, Solar Products pitted their V Series heater against the competition in a head-to-head comparison.

Solar Products built a V series heater to closely match a sample heater from a leading competitor. Both heaters were 4.25” x 13.75” with (2) elements of 11” heated length. The competition used 0.135” thick elements and Solar used its closest match, 0.139” thick. To compensate for the slight difference in resistance, the voltage was adjusted so that each heater produced the same total wattage of 1,481W

With both heaters operating at the same wattage for the same period of time, a thermal imaging camera from Electrophysics was used to capture an image of the back side of the heaters.

In thermal imaging, the hottest temperature is represented by the brightest color. The images clearly show how much more heat is lost to the back side of the heater via conduction along the numerous element-retaining pins.

The elimination of heat-conducting pins is one giant step in reducing back losses. Another giant step is the use of 2” of insulation behind the board, which is standard construction for the Solar Products V Series heaters and is not even offered by the competition. The combination of these two factors gives the V series greatly reduced back losses and therefore, increased radiant efficiency.

The numerous mounting pins in conventional stamped element heaters perforate the refractory and significantly weaken it to the point that when shipped in a horizontal plane, the heater frequently breaks under its own weight. For this reason, it is common for OEMs to remove heaters from a machine to be packed and shipped separately and then to be re-installed on site. This additional handling can be costly.

The bonded V-shaped element actually increases the board strength. The cement in the mounting grooves has been found to penetrate into the board, bond with the fibers and increase the strength. Further, the metallic element with its anchors cemented into the grooves reinforces the board further so that the finished board is stronger than it was originally.

With the V-series’ robust panel heater construction, there is no need for costly special handling.

The alloy used for stamped element heaters has an upper temperature limit of 2,370 oF. In conventional (pinned-element) construction however, the allowable temperature range is reduced by the poor hot-strength performance of their elements which are only intermittently supported by pins. Because the V series elements are securely anchored every 1/8” along their entire length, they are able to withstand higher element temperatures without sag or element bunching. In addition, the V shape makes the elements more rigid and controls the element’s thermal expansion and contraction so that the element will not distort even at extremely high temperatures. The exceptional hot strength extends the allowable temperature range for V series elements. The V series is available at watt densities up to 100WSI, a level that was previously unachievable by any medium wavelength panel heater.

To illustrate the exceptional hot strength of the V-Series elements, the heaters were subjected to a torture test. The voltage was adjusted so that both heaters operated at an element surface load of 75 watts per square inch. This resulted in the competitor’s heater running at 2,040W and the V-Series heater running at 2,119W. The heaters were operated face-down and cycled on and off for 2.5 minute intervals. The test ran 24 hours a day for a period of two weeks.

The before and after photos show that the V series heater looks like new, whereas the competitor’s has suffered a tremendous amount of element sag and creep. It simply cannot stand up to the element temperatures and wattage loading that the V series can. It should be noted that pinning every single loop would not be a good solution for conventional construction. Although this would diminish element sagging, it would significantly increase the cost, significantly weaken the board, significantly increase back losses and create new thermal expansion issues.

After high temperature testing, the V series heater retains its original uniformity while the competitor has portions of elements hanging closer to the product than others. With difficult-to-process materials, this may result in non-uniform heating. The distorted element will fail more quickly as a result of element loops moving closer together and creating hot spots.